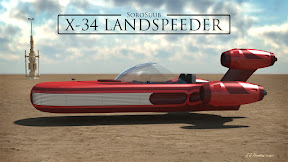 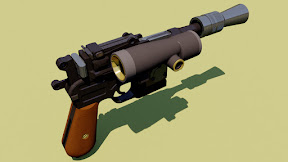 I just finished a project that has been keeping me busy for a while (which I will write about soon) so I thought I would come back to my DL-44 blaster and make the hero version used on Hoth. Not much has changed from the Bespin version; the only real differences in the two versions are in the mount for the scope and the details on the flash hider.

For the scope mount, the bracket dimensions are just a little different and the knurled knob is replaced with a metal disc of some sort with three machine screws attaching it to the gun body. The flash hider goes from the three knurled stripes on the base to just one narrow stripe and one wide stripe, and the transition to the flared part is a bevel instead of a bullnose radius.

After all the classic Star Wars Blasters I have modeled, I decided to model one of the newest props to grace the silver screen. This time it is the blaster given to Rey by Han Solo in The Force Awakens. She puts it to good use outside Maz Kanata’s castle right before Kylo Ren captures her.

This prop. unlike the ones in the Original Star Wars Trilogy, was not based on an actual gun from earth. With exception to the design of the grips (which appear to be Mouser C96 grips put on backwards with the mounting holes relocated), everything about this prop was designed machined from scratch. The main screws used on the prop are Security Torx machine screws and the others are hex socket cap screws and socket button head screws. Continue reading

Having just completed my revamped Return of the Jedi version, I decided to model the version of Boba Fett’s EE-3 Carbine rifle from The Empire Strikes Back.

It was a little bit more difficult to model this version of the prop because many of the parts added to it by the prop builders are unidentified.

Starting with the Webley & Scott No. 1 MKI flare pistol from the ROTJ model, I began by working on the barrel rings to which the scope rings and scope are mounted. What these parts are, isn’t exactly known on the prop were but the best guess are pool pump tubing clips combined with metal pipe clamps. The rear one has a metal clamp with a tightening screw at the bottom and the front one is more or less a curved strip of metal that fits inside the tubing clamp. The front ring is attached to the MPP Microflash flashgun body (that the prop maker slipped inside the barrel of the flare pistol) by two short bolts that poke through the inside of it through the holes of the rings. Nothing secured the bolts other than what appears to be some wire wrapped around the two bolts. I realized I forgot to add the wire detail to the model but I will fix that soon. The modeling was the simple part, finding good reference photos was the challenge.

After recently reviewing my old 3D model of Boba Fett’s blaster, I discovered quite a few discrepancies in details and dimensions from the actual prop. I was initially concerned with bracket for the stock because, remembering from when I first modeled it, it was not quite right. In fact, the bracket was way off in its appearance. Then as I started working on the bracket and I discovered even more incorrectly dimensioned parts. Therefore, the best course of action was to start over from scratch. I could go over all the problems with the first model but there would be too many to list.

The Blastech EE-3 Carbine rifle prop used by Boba Fett in Return of the Jedi, like the one in The Empire Strikes Back, started with a WWI Era Webley & Scott No. 1 MKI flare pistol. Various found parts were added onto it including a 4×20 riflescope. The ROTJ version of the prop is significantly different from the one in The Empire Strikes Back and most notably in the design of the gun barrel. The prop was much more refined as it was in several close-ups shots.

I had a lot of fun creating the DL-44 blaster model so I thought I would do another. This time it was the Blastech T-21 Light Repeating Blaster from Star Wars: A New Hope. The Sandtrooper squad leader used it tracking the droids they were “looking for”. They used it in a only few scenes and not much is known about it except for that it was a WWI Era Lewis Machine Gun with some parts added to it.

Most of the work was modeling the Lewis Gun and that is 95% of what comprises the blaster. If you simply take away the wires and connectors that I modeled and add the field mount, you have a fairly accurate model of a Lewis Gun. I use the word “fairly” because my modeling is based what I could measure from the few good photos and some old schematics I found on the web.

After my last starship project was finished, I thought I would do some small and I decided on modeling a version of Han Solo’s DL-44 blaster. There were quite a few versions of the prop used in the original Star Wars Trilogy but all were German Mauser C96 “Broomhandle” semi-automatic pistol based.

I decided that I would model the version used by Han in the Bespin scenes of The Empire Strikes Back. While not as iconic as the “Greedo killer” version Han Solo uses in the Cantina scene in A New Hope; rather it is the one that he fired at Darth Vader before being disarmed. I plan to model the other versions in the future and thankfully the tough part (the Mauser) only needs modeling once because it will not change.

The parts that turn the Mauser C96 pistol into The Empire Strikes Back Bespin version are a WWII era US Army M19 Tank/Artillery gun sight, a machined bracket for the sight, a knurled nut, a custom milled flash hider and various parts from the Revell 1:4 Visual V-8 engine model kit in addition to various screws.

The ship is now complete (yay!) and I am now working on a map of the interior. I have been working on this project on and off for over 4 years and I finally have a complete ship. The ship still needs a name so hopefully I come up with one. This update outlines the final work done on the model.

Here is what I have added or finished since the last update:

Now that the Crew Bunk Rooms were finished I could move on to the rest of the crew quarters. I ended up creating just three types of State Rooms: One for the most senior officers (8), one for officers (8) and the last one for general crew members of the ship (64). I did one thing to the Mess Hall and the Galley that I had forgotten to do before starting on the rooms.

I discovered that a forgot to make something for collection of the dirty food trays in the Mess hall so I worked on making that first. Basically I created a wall panel with three slots that go through the wall of the Mess Hall and into a cabinet inside the Galley. There are three receptacles inside the cabinet that remove when full of dirty trays. I didn’t make anything for cleaning them but I guess there would be a droid for that. Continue reading

After finishing the Mess Hall and the Galley I started working on the Crew Bunk Rooms.  These rooms are intended for the flight and engineering crew but not for other personnel and senior officers who will have state rooms. There are four of these rooms for housing 48 crewmembers. The layout of the rooms had already been established and the design for the bunk pods was already done but now was time to put the rest of the design together.

Starting with what I had done already, I applied materials to the existing components including the bunk pods. I then added the standard ceiling details to the room as well as adding the floor. Continue reading