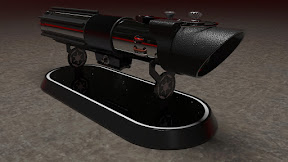 A few months back I decided to model Darth Vader’s lightsaber and make some quality renderings. I had modeled a version of the prop several years ago for an entry in the SketchUp 3D Challenge but due to the time constraints it was less than accurate. I even used that model in the header of my blog before I started using my Obi Wan Kenobi lightsaber model. This time around I could take my time to really get the details right. I also tried to model something that would look realistic when 3D rendered.

As with most props in Star Wars, this lightsaber had multiple versions. There were close-up versions and stunt versions for all three Original Trilogy movies. I decided that I would do two versions, one from A New Hope and the other from The Empire Strikes Back because they are very similar. The one from Return of the Jedi was completely different and only loosely based on the previous ones. I will save that for another time.

The main part of the lightsaber hilt is a flashgun from 1950’s British press camera from Micro Precision Products with the reflector removed. The MPP Microflash is extremely hard to find since fans started making prop replicas of this lightsaber. I am sure this is a painful reality for vintage camera collectors although if they do have one, it’s boost in value is due to its connection with The Force!

The A New Hope version is actually very simple. It’s just the flashgun with 7 plastic T-track strips glued to the tube for a grip, the display lens from a vintage TI Exactra calculator slid into the opening of the clamp in the middle of the tube and a D-ring for attachment to a belt.

Sometime during production of the movie, someone broke the lever off the clamp and fixed it with a nail like object pushed through the clamp’s holes and bent close to 90 degree to hold the clamp on the flash tube and the lever push on to it. My model reflects the prop prior to the damage.

There are a few differences between the A New Hope and The Empire Strikes Back version: The prop maker added short pieces of wire inserted into the connectors on the sides of the flash tubes for detail. There are just 6 plastic T-track strips (slightly longer and blunt cut instead of rounded or beveled on the ends). And finally, the clamp is flipped the opposite direction and its lever removed or missing.

After satisfied with creating the models, I moved on to creating renderings of both versions of the lightsaber. For my Landspeeder model, I rendered the final images with Kerkythea. I had started preparing the lightsaber for rendering in Kerkythea and after setting up a few materials I figured out a good way to make a glowing lightsaber blade.

Previously, I had created the glow for lightsaber blades in Photoshop because I could figure out how to do it with Kerkythea. Anyway, after experimenting I figured out that I could create the effect by applying a transparent emitter material to a shell of mesh surrounding the regular blade mesh that was twice the diameter of the blade.

After I got the blade materials the way I wanted them, I saw on a SketchUp Facebook group or page that Twilight Render had created a free version of their software for hobbyists to use (Twilight Render V2 Hobby). I thought I would check it out and in doing so I discovered it uses the Kerkythea rendering engine but was a lot easy to configure and use. It works directly in SketchUp so there is no exporting to worry about and it can import materials from Kerkythea which would allow me to create more complex materials than Twilight Render’s hobbyist version can do.

I decided to render this project entirely with Twilight Render and just imported the lightsaber blade materials from Kerkythea. It took a while to find settings that would create high quality renderings in the least amount of time. Initially the renderings were taking up to 4 hours but I realized that the software included the presets from Kerkythea listed under “Tech” and they are much faster than their “Express” presets. I take it the Express presets are higher quality but I don’t have the patience to wait that long and listen to my computer fan blowing so loudly for hours.

I ended up creating the same scenes for both versions to simplify things although in hindsight the it is hard to tell them apart if you are just glancing at them.

I am sharing both models on the Trimble 3D Warehouse for anyone to look at.

What’s next? I haven’t decided but I may start on a small ship, and I really mean small this time as in smaller than the Millennium Falcon but bigger than Lambda-class shuttle.